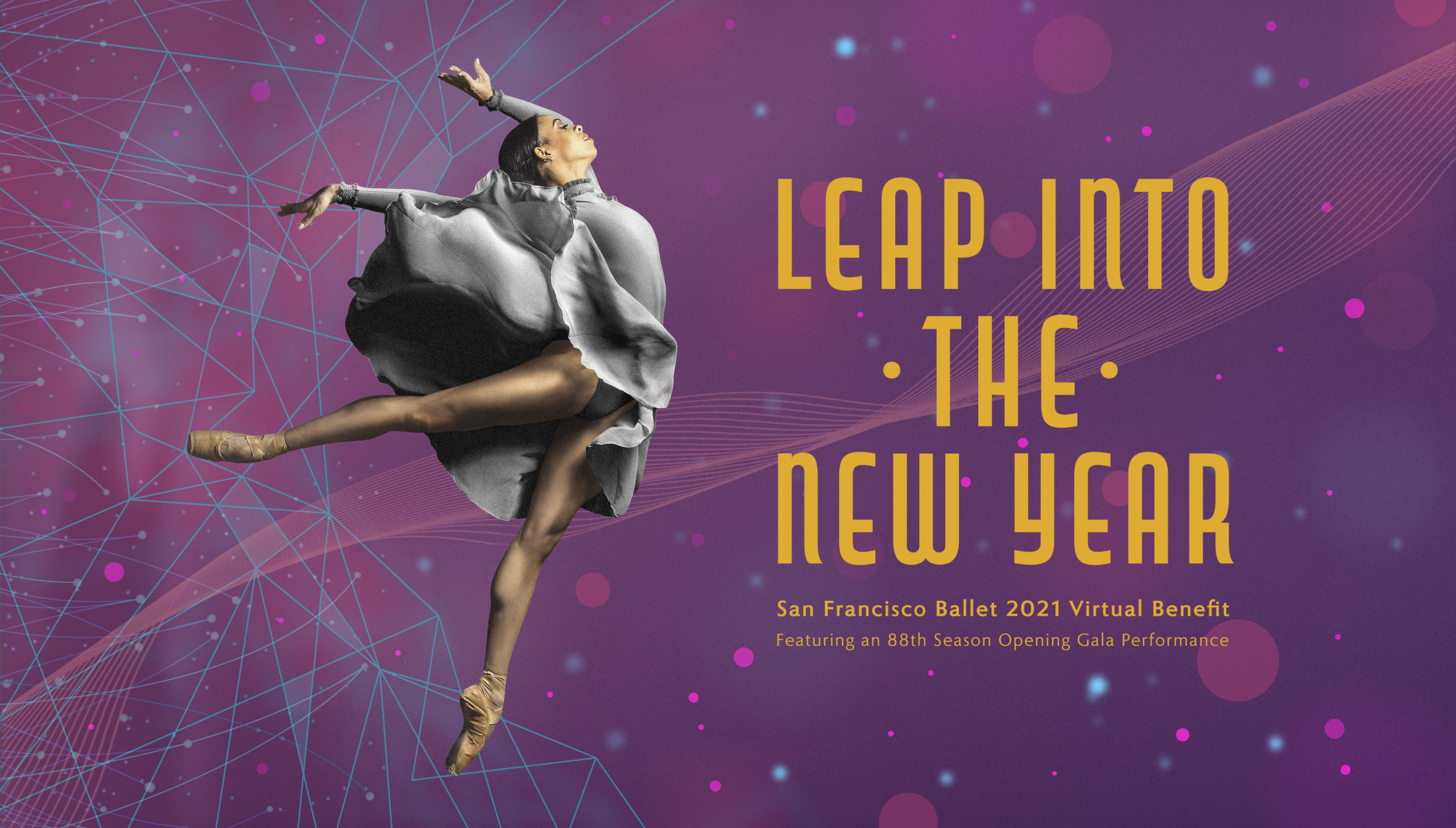 SAN FRANCISCO, CA, December 23, 2020—San Francisco Ballet (SF Ballet) announces details for its first-ever virtual benefit, Leap Into the New Year, to be held online via Socio on Thursday, January 14, 2021 to mark the opening of SF Ballet’s historic 88th Digital Season. With a performance curated by Artistic Director and Principal Choreographer Helgi Tomasson, the event includes delivered items, such as a meal, caviar, and gifts provided by McCalls Catering & Events; and wine provided by Rodney Strong Vineyards. The evening’s programming includes the SF Ballet performance debut of two of the Company’s new Principal Dancers, Nikisha Fogo and Julian MacKay, in the Act III pas de deux from Don Quixote, and an excerpt from a new work by Helgi Tomasson created on members of SF Ballet’s corps de ballet—click here to see a video about this work. Leap Into the New Year also includes a newly produced prelude to Mrs. Robinson by Cathy Marston, featuring Principal Dancers Sarah Van Patten and Joseph Walsh, and excerpts from the Digital Season’s additional world premieres, Wooden Dimes by Danielle Rowe and a new work by Myles Thatcher. Complete programming and casting are included at the bottom of this release.

Proceeds from Leap Into the New Year will benefit a wide range of SF Ballet artistic initiatives, including new works, accessible digital content, scholarships and financial aid programs for San Francisco Ballet School students, and community education programs for youth, families, and seniors. The event begins at 6 pm with access to private virtual tables; a wine education session with the event’s wine sponsor, Rodney Strong Vineyards; and behind-the-scenes content from rehearsals, followed by a 7 pm performance. Ticket holders at the Artistic Director, Principal, Producer, and Soloist levels will enjoy VIP programming, including the pas de deux from William Forsythe’s In the Middle, Somewhat Elevated, rehearsed by Forsythe on Soloist Sasha Mukhamedov and Principal Dancer Aaron Robison, and the White Swan Pas De Deux from Helgi Tomasson’s Swan Lake performed by Fogo and MacKay.  Under the direction of Music Director Martin West, San Francisco Ballet Orchestra recorded music for the event using approved safety protocols at Skywalker Studios, 25th Street Recording, and the SF Conservatory of Music, which was produced, engineered, and mastered by Leslie Ann Jones.

The evening is hosted by SF Ballet Soloist Madison Keesler, who will be styled by Neiman Marcus. All table guests will enjoy a private, virtual meet-and-greet with a Company dancer during the event and will have access to a virtual social wall where they can share photography and messages with other benefit-goers. Artistic Director and Principal level table guests will also have the option to request an on-site, socially-distanced photo-op with Drew Altizer Photography. Tickets to the event start at $3,000 for a pair of guests, or $1,600 for a virtual table of four for ENCORE! members. Guests who wish to receive a meal, wine, and gifts delivered to their home day-of must RSVP by December 31, 2020. Reservations may be made online or by contacting Emma Lundberg, SF Ballet’s Special Events Manager, at elundberg@sfballet.org or 415.865.6629.

SF Ballet’s subscribers who have purchased the Premium Plus Digital Package, on sale through February 3, will enjoy one-week access to selections from the virtual benefit’s programming beginning January 25.  For photos, complete credits and casting, and questions regarding Leap Into the New Year, please contact Kate McKinney, SF Ballet’s PR & Communications Manager, at kmckinney@sfballet.org or 720.840.1892.

CASTING TO BE ANNOUNCED

ABOUT HELGI TOMASSON
Helgi Tomasson, one of the most venerated classical dancers of his generation, embarks on his 36th season with San Francisco Ballet in 2021. Born in Iceland, he danced with Harkness Ballet, The Joffrey Ballet, and New York City Ballet, where he distinguished himself as a dancer of technical purity, musicality, and intelligence. Tomasson assumed leadership of SF Ballet in 1985. Under his direction, SF Ballet has become a company widely recognized as one of the finest in the world. Tomasson has balanced devotion to the classics with an emphasis on new works, cultivating frequent collaborations and commissions with choreographers such as William Forsythe, Christopher Wheeldon, Alexei Ratmansky, Trey McIntyre, Cathy Marston, and Mark Morris, among many others. He has choreographed more than 50 works for the Company, including full-length productions of Swan Lake, The Sleeping Beauty, Romeo & Juliet (taped for Lincoln Center at the Movies’ Great American Dance), Giselle, and Nutcracker (taped for PBS’s Great Performances). He conceptualized the 1995 UNited We Dance festival, in which SF Ballet hosted 12 international companies; the 2008 New Works Festival, which included 10 world premieres by 10 acclaimed choreographers; and 2018 Unbound: A Festival of New Works. Tomasson has also connected SF Ballet to the world, through co-commissions with companies including American Ballet Theatre, The Royal Ballet, and Dutch National Ballet; and major tours to Paris, London, New York City, China, and his native Iceland. In 2020, Tomasson received the San Francisco Arts Medallion, created by the Museum of Performance + Design to recognize those individuals whose leadership, action, and generosity have benefited the cultural life of the San Francisco Bay Area.