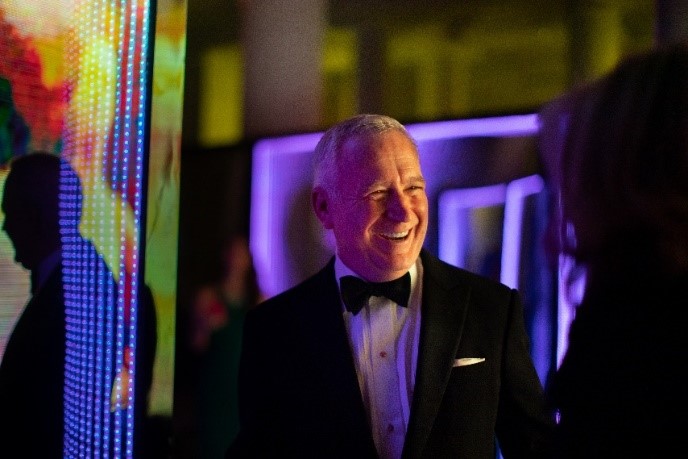 SAN FRANCISCO, April 19, 2019—San Francisco Ballet commemorates outgoing Executive Director Glenn McCoy with “Celebrating Glenn,” a reception and onstage dinner and performance by the Grammy Award–winning SF Ballet Orchestra on Monday, May 6, 2019 at the War Memorial Opera House. McCoy, whose retirement at the end of the 2019 Season was announced in September 2018, joined the organization in 1987. He became General Manager in 1993 and Executive Director in 2002, and his 32-year career has led the organization to financial strength and operational excellence. McCoy will be awarded the Lew Christensen Medal at the May 6 event, making him the 18th individual to receive the award since its establishment in 1983. The medal is given to the rare individuals who have left an indelible mark on the history of the Company; past recipients include McCoy’s longtime collaborator and SF Ballet Artistic Director and Principal Choreographer Helgi Tomasson in 2005, Lew Christensen in 1983, Chris Hellman in 1999, Jocelyn Vollmar in 2003, Lucy Jewett in 2004, James Herbert in 2008, and Diane B. Wilsey in 2019.

Proceeds from “Celebrating Glenn” will establish The Glenn McCoy Executive Director’s Fund, an endowed fund for San Francisco Ballet employee development. “It is my hope that SF Ballet is a place where staff can thrive in their professional journeys,” McCoy says. “I’ve benefitted greatly from attending professional development classes, conferences, and events throughout my career, and hope to facilitate a future where similar learning opportunities are consistently available to staff, regardless of the financial climate and potential variances in the annual budget. With the Glenn McCoy Executive Director’s Fund, SF Ballet can take one step further in ensuring staff growth that will benefit not only the Company, but also the larger dance community in years to come.”

“Celebrating Glenn” begins with a reception at 5:00 pm, followed by a 6:30 pm performance on stage by the SF Ballet Orchestra and Music Director and Principal Conductor Martin West of selections of music inspired by McCoy and his enthusiasm for and advocacy of the Company. Associate Principal Double Bass and composer Shinji Eshima’s Fanfare opens the program, followed by Stravinsky’s Circus Polka (from Jerome Robbins’s ballet of the same name); an orchestration of Moritz Moszkowski’s Gondoliera, op. 41, recorded in 2016 to commemorate the 40th anniversary of the Orchestra; Leroy Anderson’s “Fiddle-Faddle” from Mark Morris’s Sandpaper Ballet; the “Entr’acte” from Tchaikovsky’s The Sleeping Beauty, highlighting Concertmaster Cordula Merks; and more. For “Celebration Package” ticket holders, a dinner on stage with McCoy, Artistic Director and Principal Choreographer Helgi Tomasson, and SF Ballet Principal Dancers concludes the program.

Please contact Kate McKinney at kmckinney@sfballet.org for all press inquiries.

About Glenn McCoy
Glenn McCoy’s career in the performing arts spans nearly 40 years of operations management and marketing in ballet and opera. He first joined San Francisco Ballet in 1987, and during his 32-year tenure has held the positions of Company Manager, General Manager, and Managing Director. He was elected to the position of Executive Director in April 2002.

McCoy has overseen the production of more than 130 new ballets and more than 50 tours, including engagements in Paris, London, New York, Beijing, and Washington, DC. He supervised SF Ballet’s operations for the critically acclaimed international dance festival, UNited We Dance, in 1995; SF Ballet’s 75th Anniversary Season in 2008; and Unbound: A Festival of New Works in 2018. He has overseen tapings of Lar Lubovitch’s Othello, Helgi Tomasson’s Nutcracker, and John Neumeier’s The Little Mermaid, which have been broadcast on PBS by Thirteen/WNET New York’s performing arts series Great Performances, as well as Tomasson’s Romeo & Juliet, which premiered in Lincoln Center at the Movies’ Great American Dance series in 2015.

In addition, Glenn McCoy is an active leader in arts advocacy, spearheading two major ballot measures benefitting all arts organizations in San Francisco, including the successful passing of Proposition E which restores arts funding for SF arts and culture to the hotel tax without raising taxes. He is also deeply committed to advancing diversity, equity, and inclusion within the dance field, having launched SF Ballet’s Diversity, Equity, and Inclusion Initiative. In June 2019, McCoy will be honored for his achievements in Cleveland, Ohio as he accepts Dance/USA’s ‘Ernie’ Award, which was created to recognize extraordinary artists and administrators in the dance field.

Prior to joining San Francisco Ballet, McCoy held marketing positions at the San Francisco Opera and at The Metropolitan Opera in New York City, where as advertising manager he was responsible for promoting The Met seasons of American Ballet Theatre, as well as other international dance companies including Paris Opera Ballet, The Royal Ballet, the Bolshoi Ballet, and Japan’s Grand Kabuki.

McCoy has served on the Board of Trustees of Dance/USA, the national service organization for professional dance. A native of New Bern, North Carolina, McCoy earned his Bachelor of Arts degree in theater and communication arts from Appalachian State University in North Carolina.

Celebration Package tickets are $2,000 and are available by contacting Meg Sullivan at 415-865-6625 or msullivan@sfballet.org.