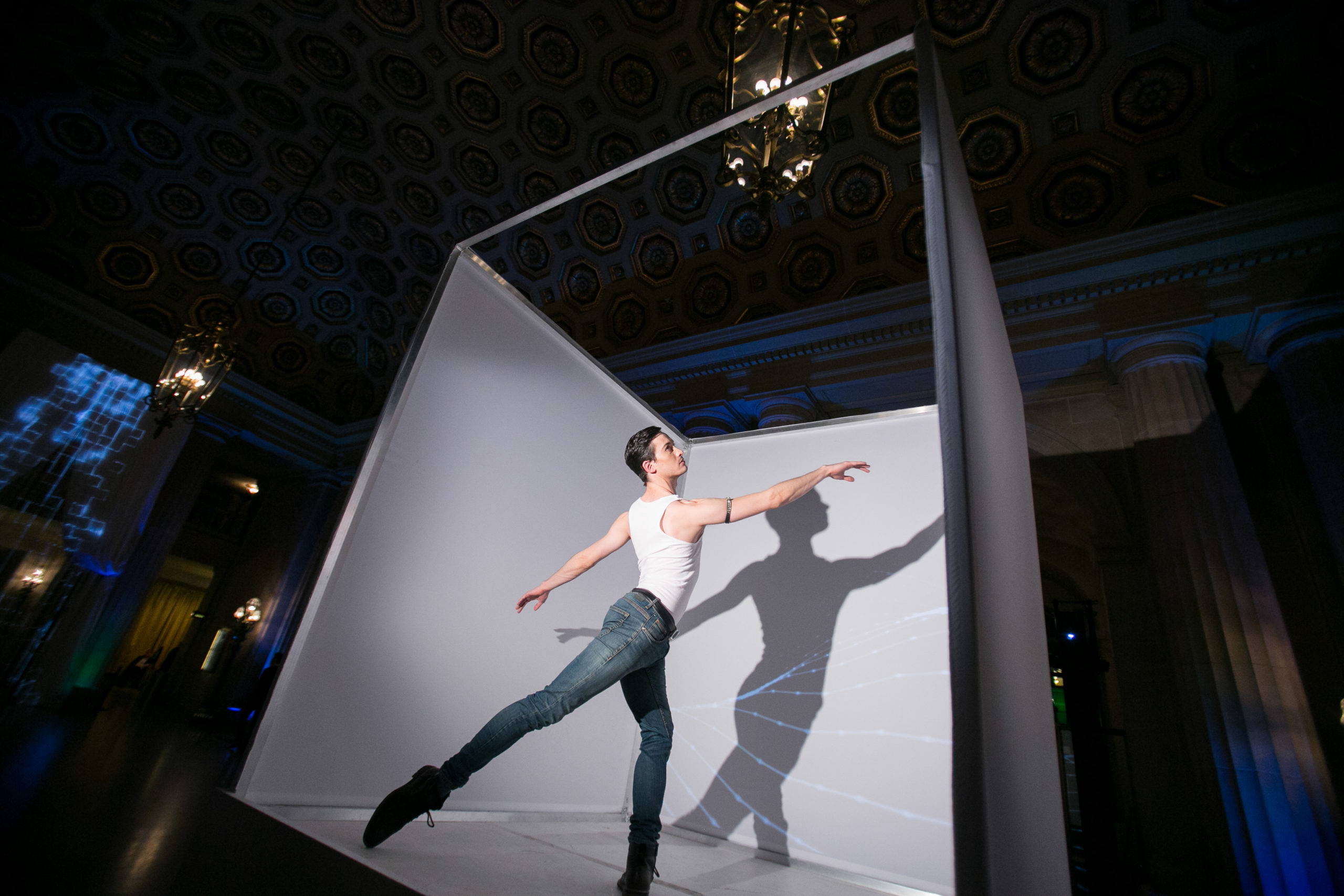 SAN FRANCISCO, January 28, 2020—San Francisco Ballet (SF Ballet) presents its fifth-ever Sensorium at the War Memorial Opera House on Tuesday, February 25 from 7 to 11:30 pm. Tickets start at $35 for the evening, which includes interactive pop-up installations, food and drinks for purchase, an 8 pm performance of Edwaard Liang’s The Infinite Ocean and Mark Morris’ Sandpaper Ballet, and an after party in the lobby and lower level of the Opera House. Sensorium transforms the Opera House into a total sensory experience, offering opportunities to learn about pointe shoes, ballet buns, and tutus. Fashion designer Lan Jaenicke returns with an on-site “instant couture” mini-atelier pop-up, one of many Sensorium art installations curated by local artist and founder of Sequoia Design Lab James Buckhouse.

Sensorium ticket buyers who are also members of ENCORE! are invited to a pre-party at 5:30 pm to have a drink and snack with the next generation of ballet supporters. ENCORE! hosts social, networking, and educational events for young Bay Area professionals interested in gaining a behind-the-scenes perspective on SF Ballet.Sensorium tickets go on sale to the general public today. Tickets begin at $35 and may be purchased online at sfballet.org/sensorium. Please direct press inquiries to Kate McKinney at kmckinney@sfballet.org.

About the program
Mark Morris is one of the world’s most influential choreographers, known for his musicality and biting wit. Created in 1999 for SF Ballet and with costumes by Isaac Mizrahi, Sandpaper Ballet is a rare work in the repertory that sets neoclassical ballet to “funny” music—in this case, nostalgic pop-orchestral tunes by Leroy Anderson: “Sleigh Ride,” “Fiddle-Faddle,” “The Typewriter,” “A Trumpeter’s Lullaby,” “The Syncopated Clock,” and more.  “I didn’t trust ballet orchestras,” the choreographer writes in Out Loud, his new memoir written in collaboration with Wesley Stace. “It turned out that the San Francisco Ballet orchestra was very good.” It was then Morris’ “apology and joke” to set the ballet, his second work for the Company, to Anderson’s novelty tunes. Staged by longtime Morris-collaborator Tina Fehlandt and with lighting by James F. Ingalls, Sandpaper Ballet is one of seven ballets that Morris has created for SF Ballet—more than he’s created for any other company.

Edwaard Liang’s The Infinite Ocean completes Sensorium’s program. Taipei-born Liang is the artistic director of BalletMet in Ohio, though his youth was spent in Marin County. “[San Francisco Ballet] is a part of me,” Liang said during an SF Ballet interview before the work’s premiere. “It’s like coming home in some sort of way.” Liang created The Infinite Ocean to explore the idea of being reconnected with his deceased father, who died when Liang was 13, “on the other side of the infinite ocean.” Set to a violin concerto by London-based composer Oliver Davis from 2018, The Infinite Ocean is Liang’s third work for SF Ballet and premiered during 2018’s Unbound festival. The ballet toured to The Kennedy Center in 2018 and Sadler’s Wells in 2019, during which it was celebrated as “a stunner…a ballet of sheer beauty” by Dance Europe. Six couples wear costumes designed by Mark Zappone; scenic design by Alexander V. Nichols and lighting designs by James F. Ingalls present a thoughtful, sunset-inspired scene modeled after Olafur Eliasson’s The Weather Project, exhibited at the Tate Modern in 2003.

About San Francisco Ballet
San Francisco Ballet, long recognized for pushing boundaries in dance, has a history of making history. The Company has enjoyed a long and rich tradition of artistic “firsts” since its founding in 1933, including performing the first American productions of Swan Lake and Nutcracker, as well as the first 20th-century American Coppélia. SF Ballet is one of the three largest ballet companies in the United States and currently presents more than 100 performances annually, both locally and internationally. The mission of SF Ballet is to share its joy of dance with the widest possible audience—in its community and worldwide—and to provide the highest caliber of dance training in its School. Under the direction of Helgi Tomasson, the Company has achieved an international reputation as one of the preeminent ballet companies in the world. For more information, visit sfballet.org.