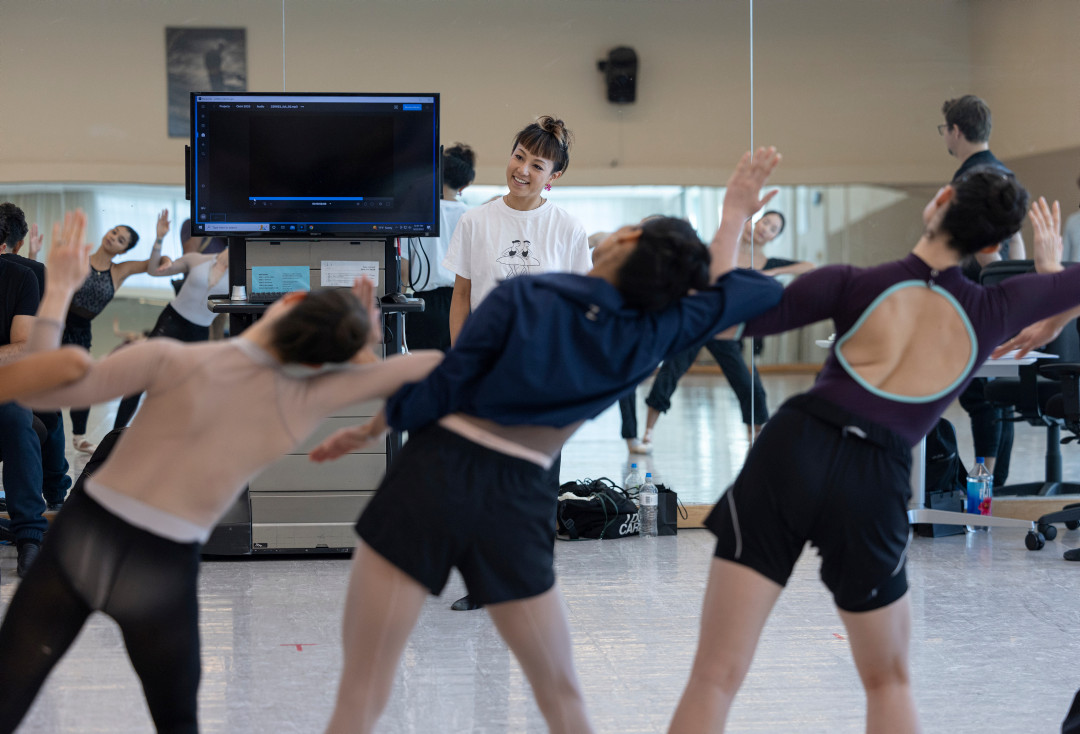 Single tickets to the 2023 Season are on sale now

next@90 is made possible by Presenting Sponsors Jim and Cecilia Herbert and Anonymous; Major Sponsors Yurie and Carl Pascarella; and Sponsors David Kaplan and Glenn Ostergaard, John and Amy Palmer, and David H. Spencer.

ROBERT GARLAND, named the new artistic director of Dance Theatre of Harlem in 2022, creates Haffner Serenade for next@90, his first work for SF Ballet. For his new ballet, Garland finds motivation in the African word Sankofa, which represents the need to understand the past in order to move into the future. “Part of my intention is getting dancers to experience what a standard is within the classical canon,” Garland explained. For Haffner Serenade, set to Mozart, he has created a solo on Principal Dancer Esteban Hernández which involves West African movement set in a classical context, adding “There are elements to older music that retain what I feel are African American and African-centered rhythms and syncopation.” Haffner Serenade also in part honors Helgi Tomasson, who Garland describes as a “complete classicist,” and includes costumes designed by Pamela Cummings. It is set to three movements from Mozart’s Serenade for orchestra in D major.

JAMAR ROBERTS enters a new era of his choreography by creating a narrative ballet for the first time. Roberts’ Resurrection, named after the first movement of Gustav Mahler’s Symphony No. 2 and marking Roberts’ first work for SF Ballet, involves a “witchy” lead woman who enlists the help of her community to resurrect and control a dead man, when something goes awry. A longtime dancer with and former Resident Choreographer of Alvin Ailey American Dance Theater (AAADT), Roberts is also influenced by his studies in visual art in his youth: “The idea of the cinematic lives rent free in my mind,” he said, citing the “total theater” experience offered by Pina Bausch, Alvin Ailey, and Martha Graham as inspiration for his new work. Roberts will design the scenic elements of Resurrection, with costume designs by AAADT company member Jermaine Terry.

DANIELLE ROWE, the Australia-born, San Francisco-based choreographer creates her second repertory work for SF Ballet with MADCAP. Rowe’s love of storytelling and theatrics is brought to the fore in her next@90 premiere, which dissects the anatomy of a clown and uses its motion as inspiration for the choreography. Set to eerie, carnival-inspired music by Pär Hagström orchestrated by Philip Feeney, MADCAP also offers an unusual task for the dancers: using their voices, with recitation, singing, percussive hisses and hoops and hollers throughout the ballet. “It’s been a very collaborative experience,” says Rowe, highlighting the versatility and bravery of the dancers: “They’re so willing to be uncomfortable, so willing to try something new.” Rowe’s collaborative team includes costume designer Emma Kingsbury and lighting designer Jim French. Former SF Ballet Soloist Garen Scribner is Rowe’s assistant.

VAL CANIPAROLI joined SF Ballet in 1973 and will celebrate his 50th anniversary with the Company in 2023. His next@90 ballet, Emergence, is set to Dobrinka Tabakova’s Concerto for Cello and Strings and includes costume designs by Susan Roemer and lighting designs by Jim French. In addition to dancing as Principal Character Dancer since 1985, he has created more than twenty works for SF Ballet, including Ibsen’s House, which premiered during the 75th anniversary New Works Festival in 2008.

BRIDGET BREINER, Artistic Director and Principal Choreographer of Staatsballett Karlsruhe, creates her first work for SF Ballet with The Queen’s Daughter, an adaptation of the biblical story of Salome. Set to Benjamin Britten’s only violin concerto, Breiner’s Salome (created on Principal Dancer Sasha De Sola) will depart from Oscar Wilde’s femme fatale character, as Breiner instead opts to explore the relationship between a very young girl and her mother: “In certain interpretations, Salome is a young girl who is pushed around and manipulated by her family,” said Breiner. “I found the idea of her dancing, then, as a moment of power for her. Maybe she’s a shy and introverted person, but she takes this opportunity to perform, and with this expression of herself she can ask for anything.” The Queen’s Daughter uses a Greek chorus among the cast of thirteen dancers. Minimalist costuming and sets will be designed by Jürgen Kirner.

YUKA OISHI makes her United States and SF Ballet debut with her next@90 ballet, BOLERO. Oishi’s creative process for BOLERO began in 2020, when she experienced two major life changes at once: her pregnancy and subsequent birth of her son, and the death of a loved one. “Death and life kissed each other,” described Oishi, who was motivated not to create a heartbreaking ballet, but one with energy: “When I listened to Bolero, I had to start moving,” she said about Maurice Ravel’s iconic piece. “The repetition of rhythm and melody completed my idea of a constant beating, the idea of growing a cell to the universe’s scale.” Oishi’s collaborators for BOLERO include assistant Orkan Christopher Dann, with whom she created RENKU in 2012 for Hamburg Ballet at the invitation of artistic director John Neumeier. Composer Shinya Kiyokawa has created additional music for BOLERO, which also includes costume designs by Emma Kingsbury and projections by Jun Nishida and Hiroki Inokuchi.

NICOLAS BLANC, former SF Ballet Principal Dancer and current Rehearsal Director/Coach and Choreographer at The Joffrey Ballet, returns to SF Ballet for Gateway to the Sun, his new ballet set to Anna Clyne’s DANCE for cello and orchestra from 2019. “Dance is a liberation, dance is a sense of soothing, of solace for a human being,” said Blanc, who models the five movements of Gateway to the Sun after the five lines of 13th century poet Rumi that Clyne excerpted for her score:

At Helgi Tomasson’s request, Blanc created two works for SF Ballet School in 2006 and 2007. Gateway to the Sun is Blanc’s first ballet created on the company and includes scenic and costume designs by Katrin Schnabel.

CLAUDIA SCHREIER, Choreographer in Residence at Atlanta Ballet, is creating on SF Ballet for the first time with Kin, set to a commissioned score by Tanner Porter. “Working with Tanner has blown open wide for me the possibility of what it means to work in collaboration with an artist,” said Schreier, who first worked with Porter at Boston Ballet earlier this year, and who emphasizes the give-and-take nature of their relationship. An abstract ballet, Kin features two female dancers among a cast of sixteen who are enveloped in a shifting power dynamic, pressured by the limiting nature of time. A native of New York, Schreier credits studying SF Ballet and PBS Great Performances’ production of Lar Lubovitch’s Othello as a transformative moment in her career, which includes an academic degree from Harvard University. “It’s surreal to be here, to be in this beautiful city,” she says. “I love the San Francisco Ballet dancers.” Kin includes costumes by Abigail Dupree-Polston.

YURI POSSOKHOV, SF Ballet’s Choreographer in Residence, presents his premiere Violin Concerto at next@90. Possokhov, who became Choreographer in Residence after retiring from dancing for SF Ballet in 2006, recalls Balanchine’s Violin Concerto as one of his favorite ballets by the choreographer which he danced many times. Possokhov approaches Stravinsky’s score with fresh eyes, however. “I needed to do this now,” Possokhov said. “My memory of Balanchine comes back, of course, but this impulse gives me the chance to express myself.” Violin Concerto showcases Possokhov’s musicality and is set on seven couples and one lead ballerina. Violin Concerto includes scenic designs by Alexander V. Nichols and costume designs by Sandra Woodall.

Calendar information
Tickets for the 2023 Season start at $29 and may be purchased online at sfballet.org or by calling the Ticket Services Office at 415 865 2000, Monday through Friday from 10 am to 4 pm PST.

ABOUT SAN FRANCISCO BALLET
San Francisco Ballet is one of the world’s leading ballet companies. As a commissioner, collaborator, and presenter, SF Ballet performs locally, nationally, and internationally with top choreographers, artists, and dancers while proudly celebrating its trailblazing role in dance. Since its founding in 1933 and as the oldest professional ballet company in the United States, the organization has been an innovator in dance and an originator of well-loved cultural traditions, from staging the first American production of Swan Lake to being the first company in the United States to present an annual holiday Nutcracker. In the progressive, innovative spirit of San Francisco, its aim is to share the beauty of classical and contemporary ballet, the joyful, transformative experience of dance performance by artists working at the highest caliber, and to provide exceptional training opportunities for the next generation of professional dancers in its School.